It's December 6th, and as winter sneaks into our tropical maritime climate city, the team at Imalent Flashlights, equipped with several EDC flashlights like the LD70 and R30C, as well as the MS18 and SR16, we decided to spend an evening creating content in our city's largest botanical garden before the weather became too cold to go outside. It was fun, the flashlights were truly incredible, and we even made some unexpected friends because of our shared passion for flashlights!

We entered the park after 6 pm, and the whole park soon gets dark when night arrives, carrying cameras and a bunch of flashlights, the flashlight we used for illumination while going to shooting ground is the R30C, it's a super bright EDC flashlight that's great with throw distance and some flood, weights only 216 grams, it's pretty handy and we used it at mid 2 level - 2,300 lumen. As you can see from the image, I walked behind the folks and provided illumination for us, while carrying a bunch of stuff... and that's why a compact LED flashlight is important, you never know how much stuff you'd be carrying when traveling with a group of people, a small LED flashlight is definitely more helpful and more friendly when you don't need to illuminate a large area. 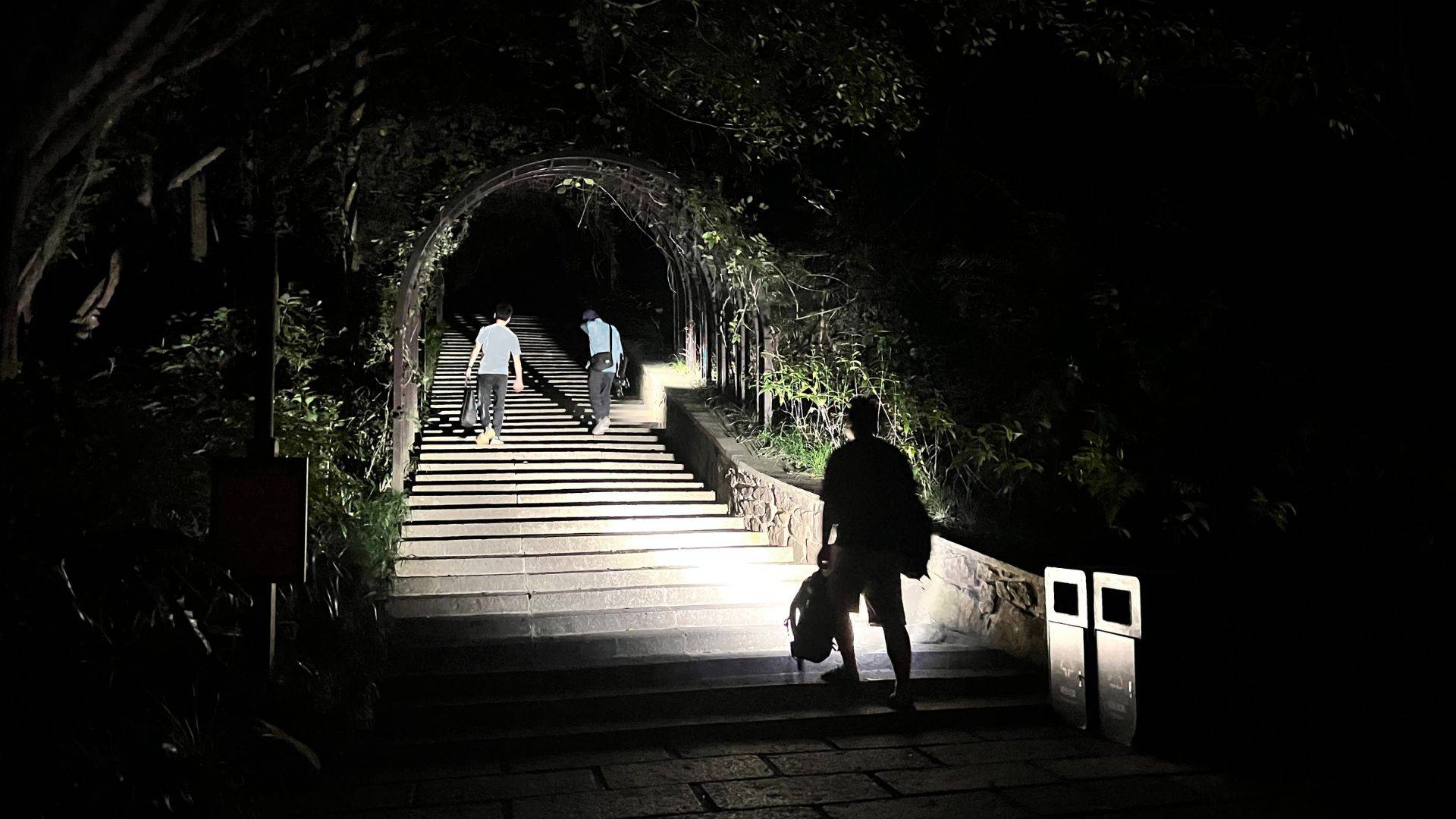 After climbing for 20 minutes, we reached a traditional Chinese temple that has 7 floors, it's located at the top of the mountain, and our surroundings were in pitch black... after we confirmed that there is no monks living in there, an MS18 is definitely worth of going for illuminating this big fellow. As you can see from the picture, MS18 the world's brightest flashlight brought the day back with 100,000-lumen output. 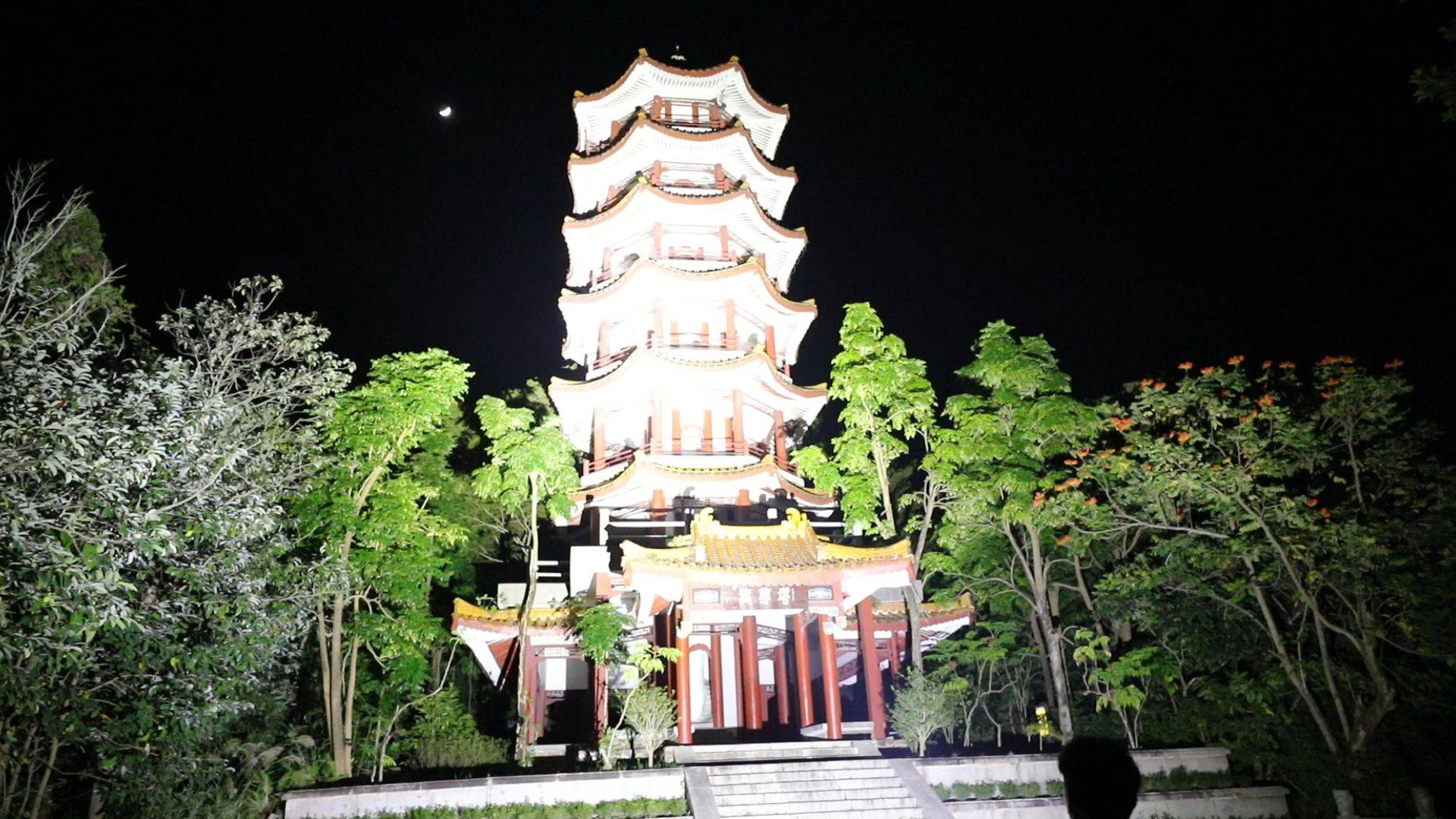 In order to find the huge flat grass court located in the center of national botanical park, we traveled around in the dark with a LD70 and a R30C, after several egoistic decision on finding our way with entirely our male instinct instead of maps, we found out the reality is that we are lost... Luckily, we brought the SR16 handle flashlight and it helped us to locate routes from a great distance, amazed by the power of SR16, our camera man Wu decides to take a picture of us using the SR16 flashlight, and got temperarily blinded for couple seconds... trust me, there are better angles to shoot an image for a flashlight. 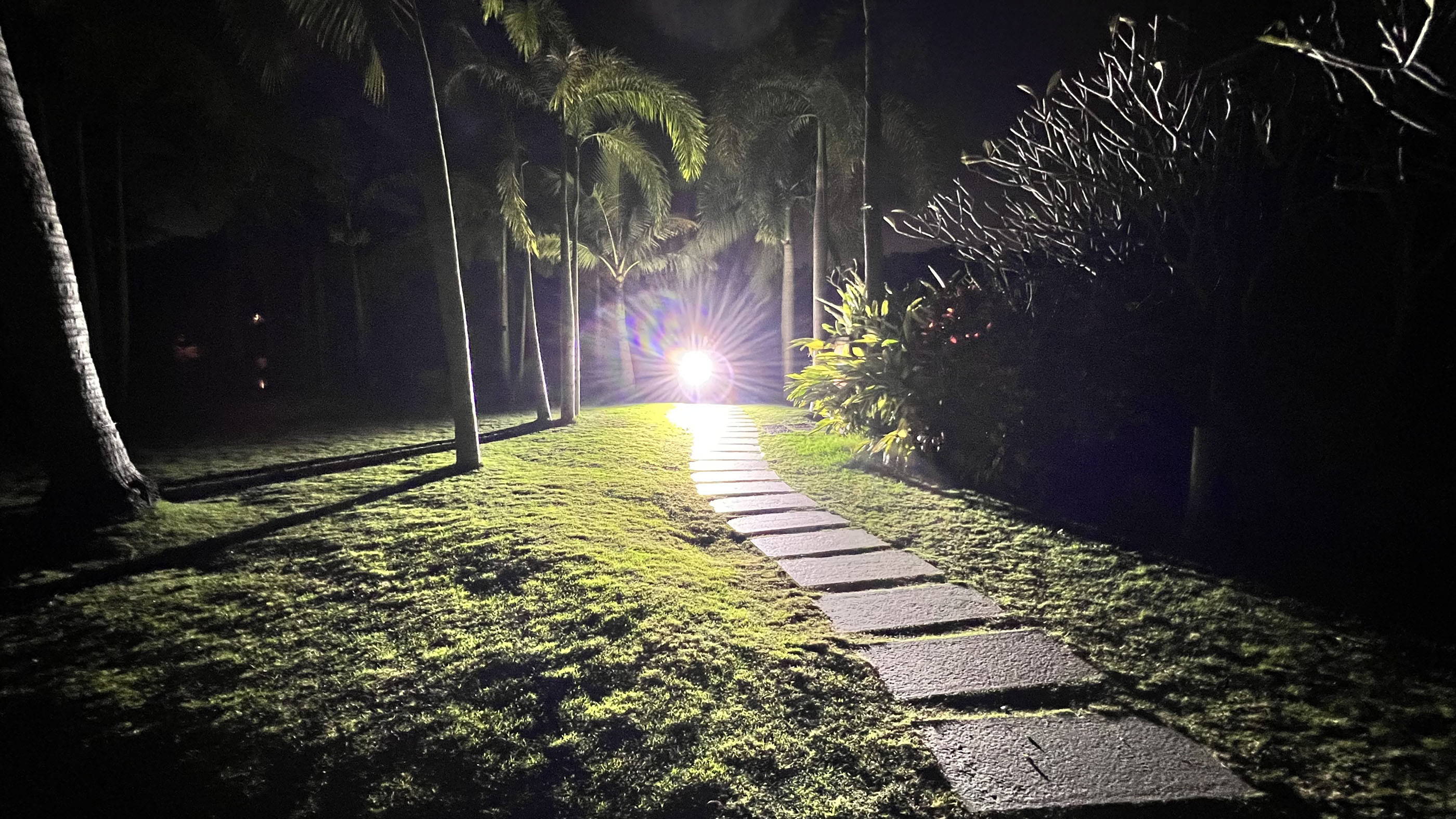 Our journey started with some EDC flashlights, and when we finally arrived the huge grass court in the center park,  a full display for the power of the world's brightest flashlight MS18 - 100,000 should take place, it's always so much fun to illuminate such a large area with a portable flashlight, its shocking brightness and the amount of reach it has are just incredible, until our disturbution of the night arrival attracted some special friends. 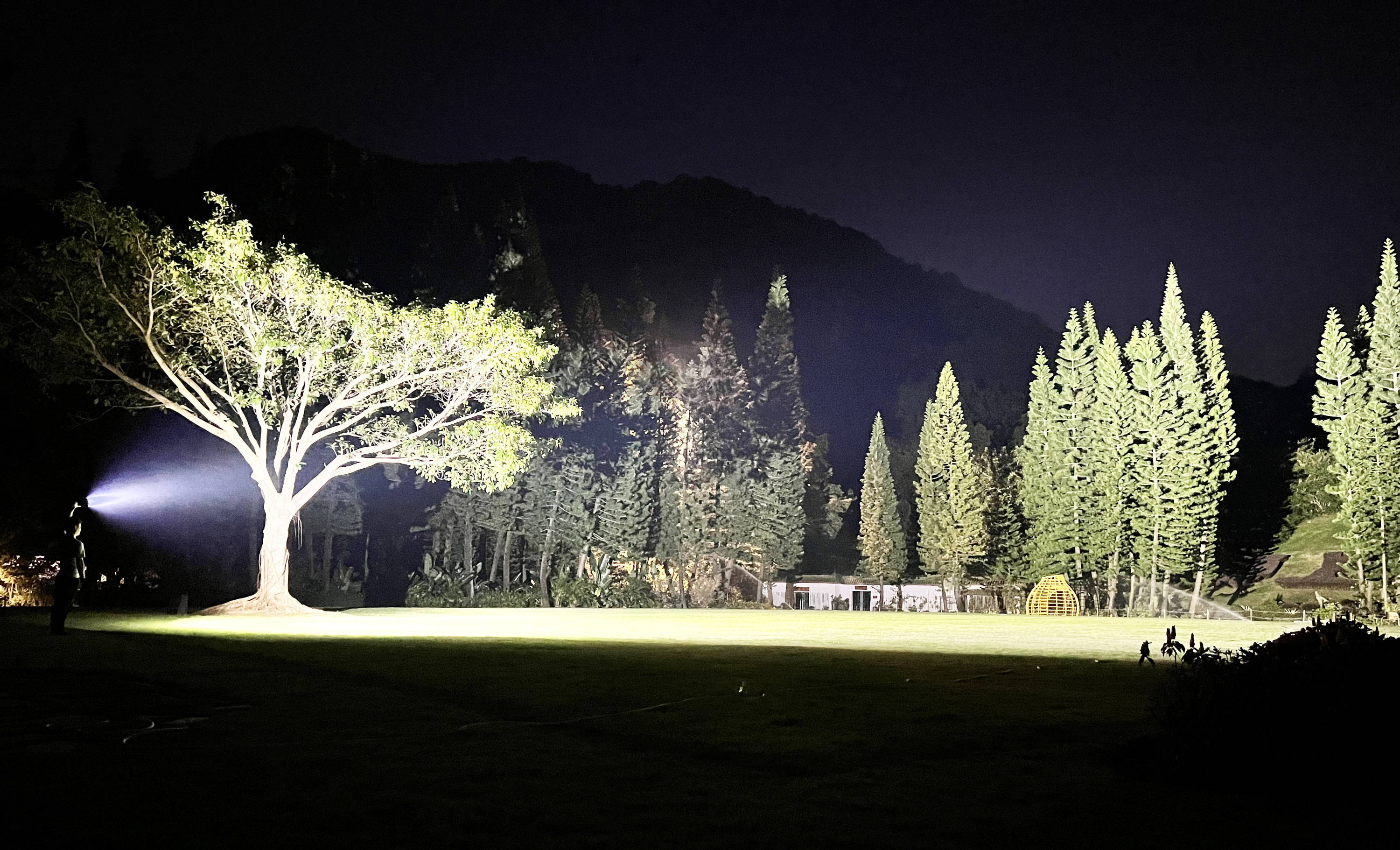 Apparently when you working as a park security personel, most likely you have a flashlight of your own, and your 2,000-lumen flashlight might seem a little boring comparing to a 100,000-lumen flashlight... Security arrived in their mini eletrical vihicle, and asked about our intention, after knowing we are just filming for this flashlight, he wanted to try it out himself, and we laughed about the incredible amount of light it produces. 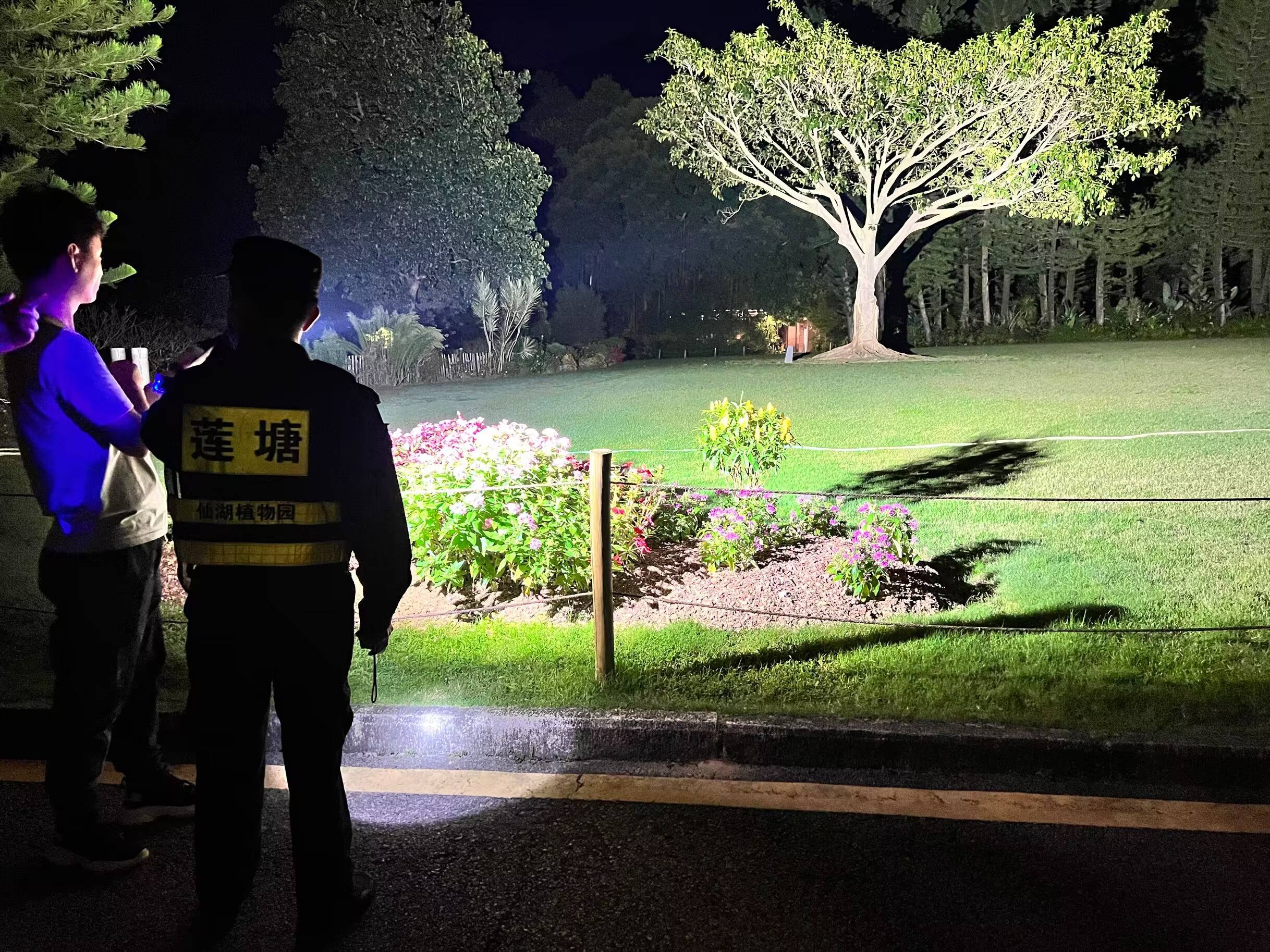 By the time we finished shooting videos, it's almost 10pm already, and we were asked to leave before the park closes down.