What are Lumens in Flashlight?

How many Lumens Mean Bright Flashlight?

Today, the flashlights are no more the flashlights your grandfather used. Flashlights with standard light bulbs have been mainly supplanted by those with LED (Light Emitting Diode) bulbs. Incandescent flashlights, with their dull amber illumination, short battery life, and vulnerability to shocks, drops, and abrupt bumps, are a thing of the past.
Batteries last longer in current flashlights because LEDs are brighter, more robust, and more efficient than incandescent bulbs. While most LED flashlights are an upgrade over their incandescent counterparts, some are superior to others, so it's critical to choose the appropriate type for the task. And this depends upon the lumens in the flashlight. 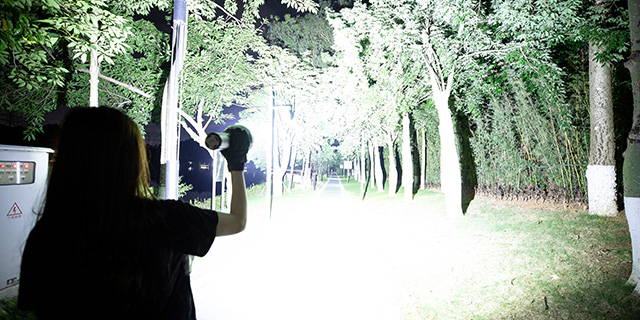 What are Lumens in Flashlight?

In the earlier days when 60-watt incandescent light bulbs were still popular, we were taught to think about watts while purchasing lights and light bulbs. At that time, the brightness of the light was directly correlated with its wattage. You would get less light if you try to save money by using lights with lesser watts.

Then, the development of fluorescent and LED technologies ended that relationship. With more advanced technologies, it's now possible to have more light while using fewer watts. However, you can no longer compare the brightness of bulbs using the outdated wattage technique. Introducing "Lumens."

Nowadays, the amount of light that a light source produces is measured in lumens. Lumen is a word that signifies "light." Therefore, it measures how much light your light source emits. You will usually see the comparison made between candlepower and lumens.

One candlepower is equal to 12.57 lumens, even though candlepower and lumens measure different aspects of light. One lumen can be exchanged to the amount of light that illuminates a 1-square-foot space when a single candle is placed one foot away from it.

The measurement of lumens—which represents the entire amount of light that a light source produces—must be done correctly using an integrating sphere. Lumens do not accurately describe the brightness of a spotlight from flashlights.

Given that a flashlight utilizes a lens to concentrate all of the light it produces in one direction, measuring light from a flashlight in lumens is actually not the ideal method. Depending on the shape of the lens and the strength of the light source, the spotlight's brightness and the focused point will vary from one flashlight to the next.

Without a reflector or lens, a 1000-lumen flashlight may illuminate an entire room like a lantern, but it cannot cast light over a great distance. A small, spherical "hotspot" of light would be thrown on the wall of the same room by the exact same flashlight, whether it had a lens or reflector. The spotlight would be brilliant, while it won't be able to light up the rest of the room that's not covered by the shallow beam.

The flashlight without a reflector or lens might perform better in close-up circumstances, but the model with one or both would perform significantly better from a distance. Therefore, don't just base your flashlight purchase on lumens. Your need to consider both lumens and lens/reflector while choosing the ideal flashlight.

Finding a flashlight that works for you will be easier if you know the lumen rating. The lens or reflector used in the flashlight will also significantly affect the local distance, width, and beam brightness. So, keep that in mind when thinking of a flashlight's brightness.

Typically, micro-sized keychains flashlight, flashlight pen, or pocket lights have a output of 10–20 lumens. You can put them in your purse or on your keychain. Although they are handy to reach to when you need them, the output is only suitable for very close circumstances where a little bit more light can be beneficial.

This rating gives you enough light to see through a keyhole, locate an object in a dark area, or provide illumination in an emergency. Usually, a single AAA battery or tiny coin-style batteries can help power these smaller lights.

Flashlights between 20 and 150 lumens are excellent for indoor use and outdoor activities. Usually, a flashlight has 100 lumens. You can use it seamlessly for suburban or urban settings. These flashlights can fit in a pocket. Hence, they are called "Everyday Carry Lights." With these lights, you can look for items that are within 20 to 30 feet. A flashlight in this range can operate for 5–10 hours using two AA batteries.

You are now using a general-purpose flashlight that is quite effective. The power of this flashlight is effective and reasonably priced. Still, a very economical light that can frequently fit in a pocket or handbag.

If you want a cheap flashlight for almost any casual activity, you should look for one in this rating. You might choose a stronger and more capable model if you want to use it frequently or if you rely heavily on it.

For tactical tasks, sailing, fishing, and hunting, flashlights with 200–500 brightness output are appropriate. This flashlight is also great for the office, store, and even the house. The battery life of flashlights in this illumination range may seem a disadvantage. The majority of items in this range still use alkaline batteries.

A flashlight in this brightness range is ideal if you need serious illumination. These flashlights have a lot of light output and can typically light up a wide space or an entire room. Moreover, they still have amazing energy efficiency. You can use them at home, while fishing, hunting, camping, or even in the workplace.

You should buy from this range when you want a flashlight with the greatest brightness but a limited budget. Additionally, the majority of the devices in this range contain Li-ion batteries, which enable you to recharge and push full power to an LED.

A 1000-lumen flashlight is useful when you need a lot of light to hunt, explore large areas, or look for something in a shipyard. If you are up for any recreational activities n a vast property, you can use these too. Indeed 1000 lumens are incredibly powerful. These spotlights also help in search and rescue operations.

Compared to similar flashlights with a smaller rating, these flashlights are more expensive and provide more light. You should be aware that using the flashlight indoors or while looking straight at it could harm your eyes.

Military and police use over 1000-lumen flashlights.

Think about size while looking for a 1000-lumen flashlight. Small lights can produce 1000 lumens of light, but they can't do so for long due to heat and battery limits. Larger flashlights are more effective at appropriately regulating 1000 lumens but are less practical.

LEDs do generate a lot of heat at this power level. Heat, however, will hinder an LED from operating at its maximum potential and will result in an LED failing before it can offer you the best results. Larger aluminum flashlights can accommodate larger or more batteries and dissipate heat.

Compared to small flashlights, these flashlights can produce 1000 lumens for a longer time due to their enormous battery capacity and ability to absorb energy.

These flashlights typically combine spotlight and floodlight features, making them perfect for lighting up a medium or a large area or a long-distance illumination. High-performance flashlights that blast between 7000 and 15000 lumens can illuminate an area from a distance of up to (700 meters).

When you need large-area lighting for outdoor activities like camping, trekking, mountain climbing, and searching occasions, flashlights with 7000–15000 lumens can help you with the best illumination. We are more eager to learn about our surroundings in the desert or the vast, dark jungle, and a flashlight with such a high brightness rating may easily accommodate our needs.

What Other Things Can Impact the Flashlight?

A 1000-lumen flashlight is incredibly bright and effective for the majority of tasks. Keep in mind that your use and the applications determine how many lumens you need in a flashlight. Also, remember that the reflector or lens design has a significant role in the overall lumens and greatly affects the application of those lumens.

The beam type, beam distance, bulb type, and runtime are all things to consider when shopping for a bright flashlight because they all have an impact on how bright the flashlight becomes. Most importantly, go with well-known manufacturers who create and build their flashlights and are upfront about their characteristics if you want longevity, durability, and quality. For more information, give a call to our team at Imalent today. What are Lumens in Flashlight? How many Lumens Mean Bright Flashlight?